A day full of color

I've been meaning to write this blog post for some time  now. However, due to all sort of day-to-day life/work situations, only now I finally found the time and energy to share with you an incredibly beautiful and happy day. Even if it was a while ago. In April to be exact.

As I was saying, it was indeed a beautiful day outside, and I felt a little more cheer in the air than usual. Plus it was Sunday, so we headed to Whole Foods (in Princeton) to look for some products, which normally I don't find in other supermarkets here where I live. Also it's kind of like our own little tradition, to eat there, every time we go shopping. They have really great organic vegan options at the salad bar, as well as soups, and other warm dishes. So that was the extra incentive to drive (a 30 min. drive) there.

So after we were done, bellies full, bags filled with goodies, and large smiles on our faces, we decided to head into town. In Princeton, that is. Expecting nothing, only wanting to take maybe a little walk, and explore this small, yet pretty town, we were pleasantly surprised though, when we drove (literally) right in the middle of a party.

At first, we had, no idea, what it was about. Not that we were complaining...haha. But even before we had time to guess, a few large banners revealed the answer. Apparently every year, the Art Council of Princeton, with the participation of students from Princeton University, as well as the support of the town, they hold this lively event called Communiversity ArtsFest. Which according with their website, featured over 200 booths showcasing original art and contemporary crafts, unique merchandise and culinary masterpieces from local chefs, plus six stages of continuous live entertainment. Also, Communiversity ArtsFest draws over 40,000 art lovers and fun seekers to downtown Princeton, making it Central New Jersey’s largest and longest running cultural event. 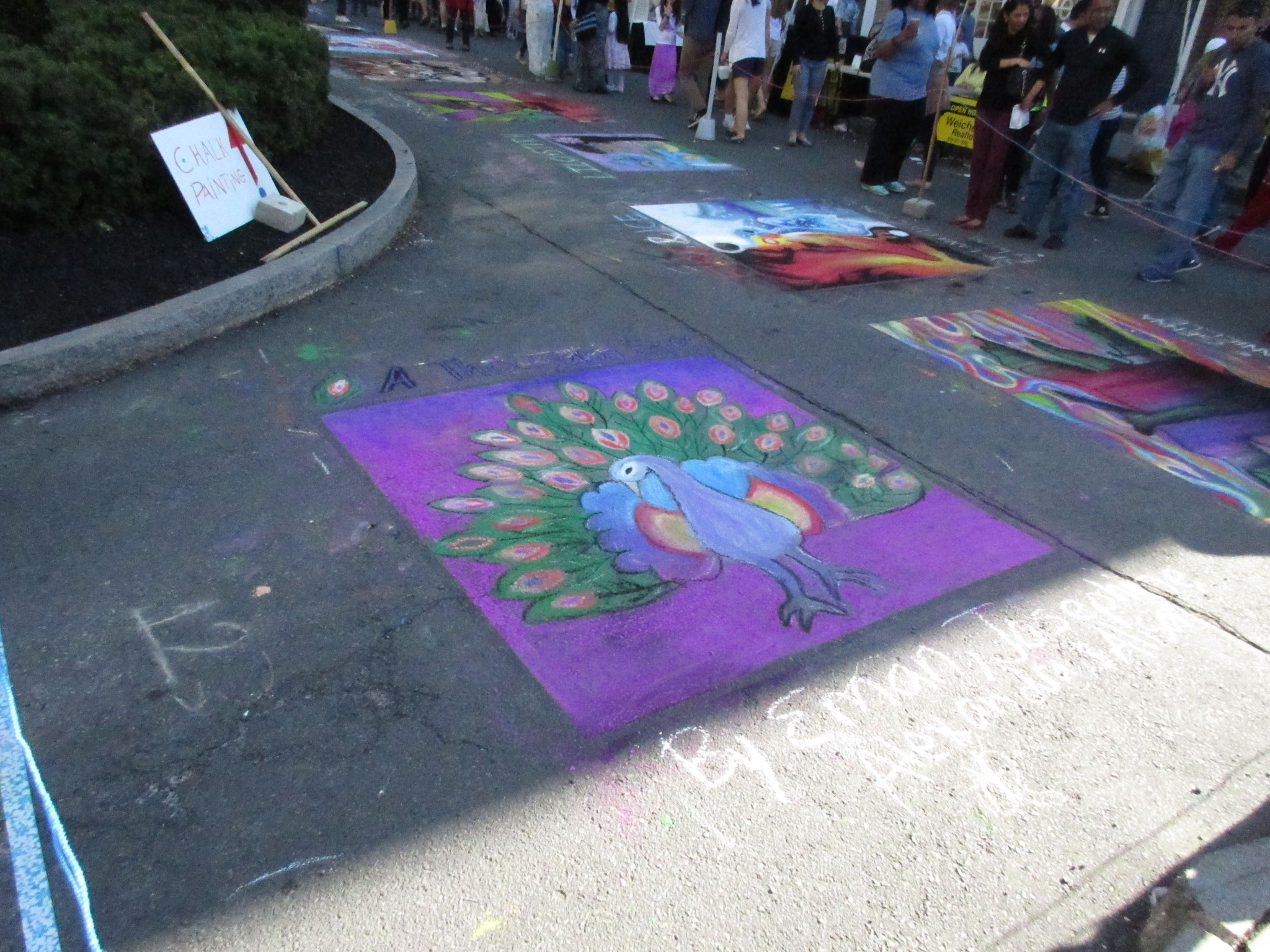 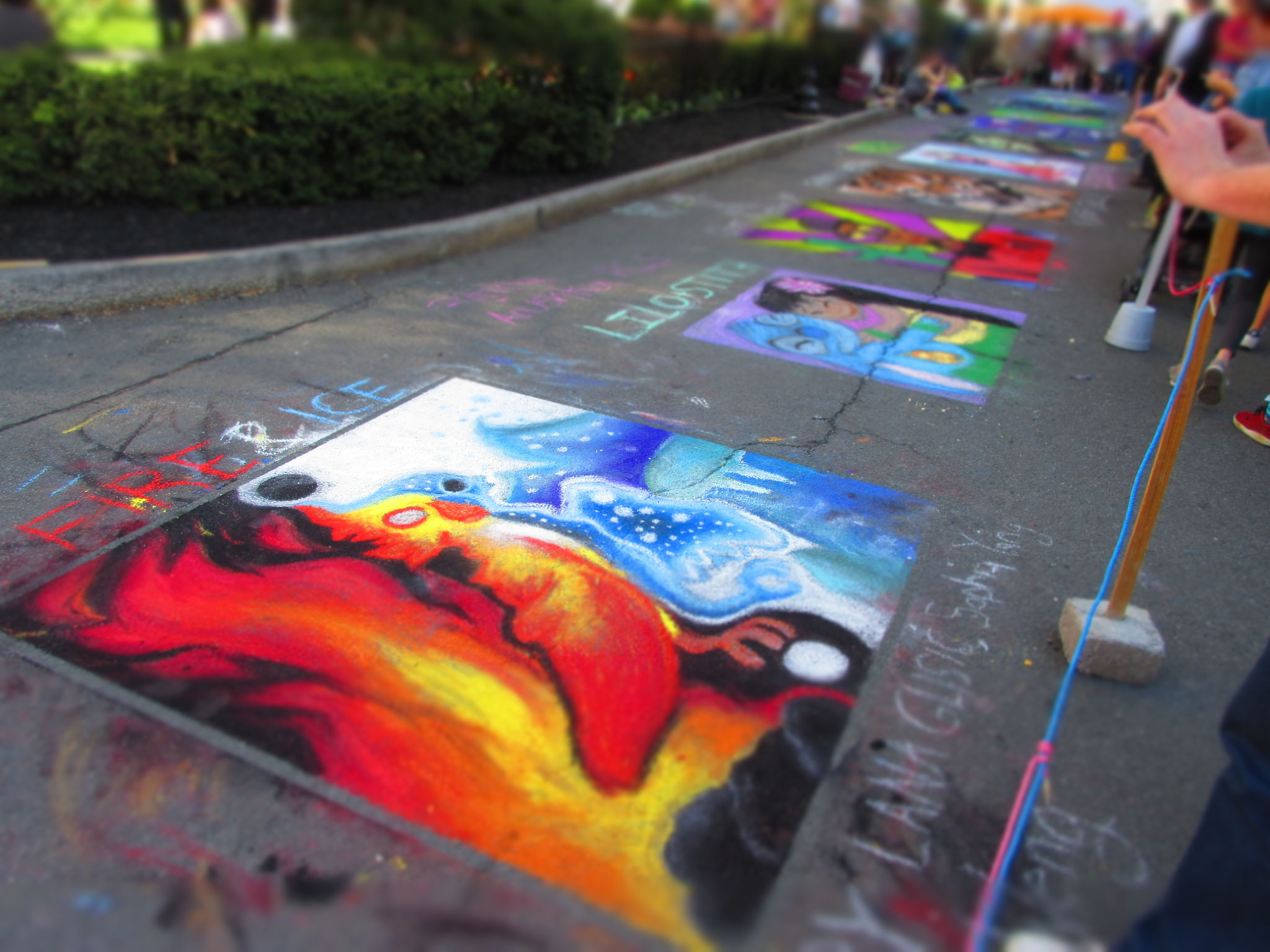 Everywhere you looked, there was this explosion of colors. I couldn't help but taking as many pictures as I could. From the information I gathered, the chalk street drawing, has a tradition of over 30 something years. Which is quite impressive.

Among many beautiful things that we discovered, I stopped by this fashion booth, called Feltinelli

And was  happy to see these very interesting designs, very unique in textures (Fine Fiber Art). Simply beautiful. Which reminded of a special shop back home called Fondul Plastic - that a very long time ago, was a place where various artist would not only sell their paintings or sculptures, but local designer clothes as well. A dear space, where my mom and I would always find beautiful and one of a kind outfits, for special occasions.

Then our next stop was Paper Source. Which is becoming one of my favourite places to go shop for anything from a birthday card to gift wrapping paper, as well as all sorts of other products like: planners, journals, notebooks, etc.

Also, I was pleasantly surprised to discover, that they even had  the five minute journal. Which is a product created by one of my favorite youtubers (Mimi and Alex Ikonn). So yeah... I wasn't kidding. There was lots of color that day. And lots of joy as well.

Until next time, wishing a marvelous week, and...

don't forget to be kind to yourself and with others,

We live through TRULY EXTRAORDINARY TIMES. And good and bad, are both included in the mix. What is taking place at this very moment, is an important DEMARCATION Point. Certain uncomfortable TRUTHS can't be denied anymore. They just showed up as if unannounced, yet, they were foretold, only to be ignored continuously by most until now.